Roller derby, a sport driven mostly by women, is a growing and gaining momentum with each season. The sport is guided by the WFTDA.com, draws interest via its own conversational terminology and rough-house tactics, and engages the masses from an incredibly wide swath of demographics. One might think the sport would be covered more by mainstream media, especially by ESPN, but there is relatively little in the way of mainstream coverage.

Sure, ESPN did cover both Suzy Hotrod in ESPN’s Body Issue and Julie Glass (AtoMatrix) recently, but where’s the coverage of the big, national bouts? There isn’t even a blip for the final scores, MVPs, or any other type of coverage. The only mainstream roller derby coverage is done by Andy Frye, a writer from Chicago and a derby player, who has covered a variety of topics involving derby and has several articles on ESPN.com. ESPN hasn’t completely ignored the sport, but there are roughly twice as many search results for ‘hot dog eating’ as there are for ‘roller derby’ on ESPN’s website. Currently, the majority of coverage is done by private bloggers that are usually referees or players. Unfortunately, one of the most reliable sources of information on derby scores and players, The Derby News Network (DNN), has recently stopped reporting and via their website “Seven years is enough. As of today, Derby News Network is retired”.

One example of roller derby being snubbed by ESPN The Magazine was reported on by RollinNews.com and outlines a vote done via social media where readers were given a list of under-represented sports (lacrosse, wrestling, rugby, motocross, and softball) and were encouraged to vote via Facebook, Twitter, and the Magazine’s website. The sport that got the most votes was then going to be featured in the Fansource issue of ESPN The Magazine. We did our best to get people involved in the vote via our own FaceBook page and twitter account. Since there was no option to vote for Roller Derby, derby fans were forced to “write-in” their votes and that’s exactly what they did.

Although the website poll’s data remains closed, the fan votes on Facebook and Twitter are easy enough to track. By the time the deadline rolled around for the poll, there were roughly 15,000 comments on the Facebook post and 1,400 votes on Twitter. Out of those, an astounding 7,000 called for Roller Derby, with rugby coming in second through the voting at about 4,000.

In one tweet, Roller Derby suddenly went from winning the vote to being ignored: “PS we see you, too, roller derby and water polo fans!! Keep in coming and maaaybe we’ll have to another vote for yall for a later issue . . . “ 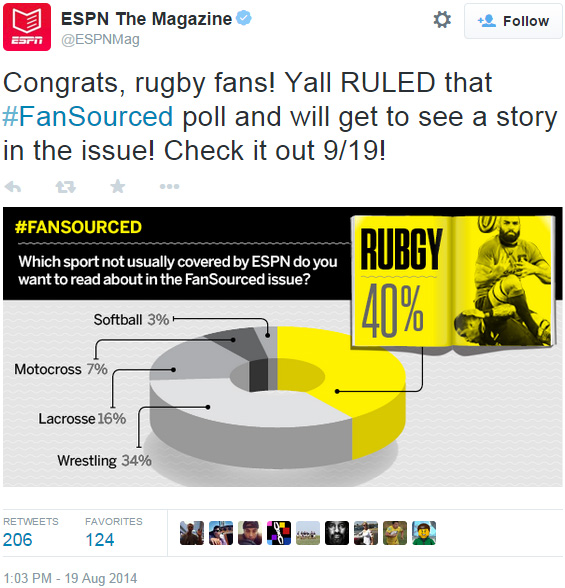 Instead of giving the win to Roller Derby, somehow Rugby came out on top with 40% of the votes. If you look closely at the infographic above it’s comical that they spelled Rugby as “Rubgy”. What happened to the votes for roller derby? It’s a question that needs to be answered.

It is also important to note that roller derby is a female dominated sport. In a sports world where male leagues of sports tend to gain far greater traction and media attention than female (just look at basketball, soccer, or any other major sport), one can’t help but wonder if the lack of a strong male league counterpart to derby contributes to the lack of reporting. Or, to put it more bluntly, is there an aversion by sports media to covering females sports that is further skewing the selection of coverage against derby? An important question to consider.