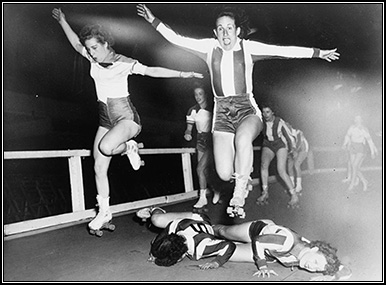 Interest in organized speed skating races began as early as 1884, when roller skating caught on and gained popularity. The sport has evolved from multi-day endurance races for pure entertainment to rowdy team competitions that attract world class athletes. Throughout the last three centuries, the sport has had it’s fair share of ups and downs, but recent media has made roller derby more popular than ever.

In 1934 a film publicist Leo Seltzer, took advantage of renewed interest in roller skating and decided to combine the popular six day bicycling races and roller skating into a new event. This resulted in a month long skating spectacle, dubbed the Transcontinental Roller Derby. This unique event simulated a cross country skating race, but consisted of 25 male/female (two person) teams skating around a wooden oval track. Team members skated 11.5 hours a day, covering a distance of 3,000 miles (the distance from New York to California). If both members came off the track simultaneously they were disqualified. Nine teams were able to finish Selzter’s first official derby.

After the success of the first derby, they hit the road and toured the US with a portable track. In the later part of the 1930’s, the sport became more physical as players were encouraged to elbow, push and dramatize falls for crowd entertainment. The length of the races progressively declined, and towards the end of the Depression a two team concept emerged. This evolved into two five person teams skating together for 15 minute periods, earning points when members lapped others– which is the standard in present day roller derby events. Roller derby has a unique scoring system.

When the US entered WWI in 1941, the sport had grown wildly, and gained almost four million spectators but sport growth was sharply interrupted as many athletes enlisted. At the end of the war in 1945, Seltzer successfully picked up the sport where he had left off. 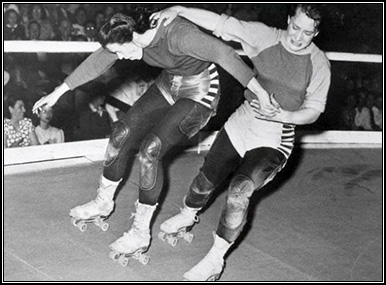 The publication of roller derby on television in 1948 was profound for the league. Crowds started at 500 and were soon over 7,000. Roller derby on TV created stars over night– the famous Ken Monte, Bert Wall and Midge “Toughie” Brashun developed remarkable fan bases. The 1949-1950 derby season is notable because within it, the National Roller Derby League was founded. It seems as though the sport and players have always struggled to prove the sport is legitimate. From the start, fans have debated whether coaches and players were authentic and if the injuries and fights were staged or real. Some fans liked the showmanship and theatrical effects, but others were turned off by them, leading to unstable support. By the 1960’s, unsure of the future of the sport, Leo Selzter gave the League to his son.

The 1960’s brought changes to Roller Derby, like mandatory helmets and players being highlighted so viewers could find them easier on TV. The Roller Games (a more comical theatrical race) was created, and was the only real competition to the NRD. Jerry Seltzer (Leo’s son) implemented tactics and ideas to appeal to a bigger television audience, but his efforts failed and attendance declined.

RollerGames debuted (and flopped) in 1989 and the sport stayed stagnant until 1999 when Spike TV produced Roller Jam.This was a classic style roller derby on a wooden banked oval track. Inline skates were allowed, but some players still chose traditional skates. This show shed light on the sport, sparking new interest. Check out our article on the best Roller Derby quad wheels today.

The revival of Roller Derby in 2000 started in Austin, TX and by 2006 had over 135 leagues. Roller Derby has spread internationally, and gained a wide television audience. There are many special effects, but live derbies entertain with drama, roughhousing, and familiar characters. If history is any indicator of what is to come, Roller Derby will surely maintain a roller coaster course and when the momentum dies down, expect something new! Skates are constantly evolving and we know you want to play derby with the best equipment so feel free to check out our Roller Derby Skates and Rookie Packages for some amazing deals!

Currently, these are the best roller derby players of all time as voted by our awesome customers.  If you love Derby like we do and need to know more about it, check out our other great Roller Derby Articles including: