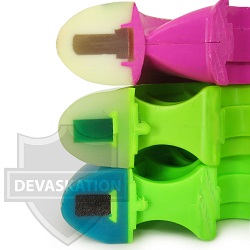 Atom Boom made by MPC, has rapidly become recognized as the #1 road wheel in the world. It is a widely known fact that MPC produces the best inline racing urethane in the world. That’s been proven with their domination of track world championships for several years. Despite their track success, the same core-tire combination is not yet as prevalent in road racing. With the introduction of Atom’s new core design combined with MPC’s inner band and tire formulas, racers and race enthusiasts will appreciate this new era of inline road racing.

Encompassed core technology was designed by Doug Glass and is covered under the Mtech Patent. Mearthane, manufacturer of MPC have a patent which covers softer urethane layer’s in-capsuled by hard urethane. All banded wheels by Atom are made by or licensed by Mearthane. BOOM wheels by Atom will be made exclusively by Mearthane. Mearthane is proven to produce the best banded wheels in the world year after year dating back to 2004. The patent dates back to the early 90’s where the technology was first used in commercial applications (i.e. IBM, ATM, and several others) and continues to be a substantial business for Mearthane. Mearthane is a performance urethane company. Their core strength is providing each of their customers with the best urethane the company has to offer. Atom is excited to be a part of this synergy and believes in the wheel core technology. The technology combined with Mearthane’s proprietary urethane Atom Wheels is poised to deliver the worldwide race scene the fastest wheel ever made.

The new Atom Boom Inline Wheel showcases Encompassed Core Technology*. The key word here is encompassed, which means the urethane band is completely surrounded by an outer layer of urethane, a technique never before seen. The common name for this manufacturing method is “dual durometer”, which has been in use for years. However, traditional dual durometer wheels simply rest their bands on the spine of the urethane core. There is no strengthening interlock or urethane poured under the band. This provides no reinforcement for the wheel, so the tire is allowed more movement under the strenuous demands of inline racing causing performance-sacrificing friction, loss of energy, and longevity.

Encompassed Technology, on the other hand, significantly increases the wheel’s endurance while providing substantial pop, snap, and rebound for ultimate speeds. Atom brought to the inline market in 2013 the first urethane band to be fully encompassed. Thus, the Atom BOOM was born. This unique technology provides better structure throughout the wheel due to its unique interlock design. Like single urethane wheels, Atom’s proprietary encompassing design allows the outer urethane (tire) to flow through holes “interlocking” the urethane. This essentially makes the tire, band, and core a single cohesive part, giving skaters better control over the flex of the tire/band combination and better control over core flex. The performance-crippling variables that other dual-banded wheels encounter are significantly reduced with Atom’s new core design.

There are not many companies innovating for the new generation of skaters. Atom certainly is, and they are so sure their new BOOM Inline Wheel will enhance your performance that they back every one of their products with an awesome warranty.